Writing can be a very lonely business; between working on my thesis, trying to write a novel, and coming up with articles for our blog I spend a lot of time writing, which directly translates to many hours alone, staring at a blank screen in frustration. Writing requires both dedication and self-motivation, so sometimes when I’m feeling stuck I will resort to googling quotes for inspiration. I was doing this the other day when I found this little gem: 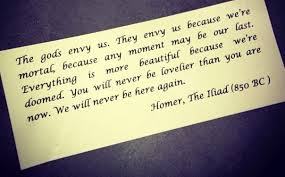 It’s a beautiful quote; it sparks the imagination and inspires a shift in thinking, everything I was looking for in a quote… but I had one lingering question…did  Homer actually write that?!? I’ve spent a fair bit of time with Homer in the past, and revisited his work recently in grad school, but I’m nowhere near quotation level. Still, the quote doesn’t even remotely read like Homer, and even assuming the language had been modernized for today’s audience, I still couldn’t remember nor even figure out where a quote like that would fit. I put the partial quote back into image search (The gods envy us Homer) and it turned up hundreds of quote thumbnails in various shapes, hues and placed upon all manner of stock pictures, some even created from a few of the better-known quote generators on the internet. Most of the time the quote was clearly attributed to Homer, with the occasional nod towards The Iliad or Achilles, both of which still lead back to Homer. Seems legit, right? How many people could have possibly failed to check their sources that badly?

I was intrigued, enough to pull out my kindle and do a keyword search, which turned up…unsurprisingly nothing… So what is this quote and where did it come from? Back to google, I switched the search parameters to all web and voila!  Brad Pitt started popping up. It turns out the quote is from the movie Troy, uttered by Achilles, who is played by Brad Pitt. While The Iliad and Troy cover the same mythological story, they are worlds – and words – apart.

Ironically, the biggest scholarly debate over Homer is  whether he was a singular genius, or a group of poets working together in the Homeric Tradition. Perhaps if it is a tradition built on the brilliance of multiple poets, the screenwriter of Troy (David Benioff) can apply for a position.

P.S. for all you Game Of Thrones fans, David Benioff writes for televised version of that series as well, which leaves George R.R. Martin just two degrees of separation away from Homer… 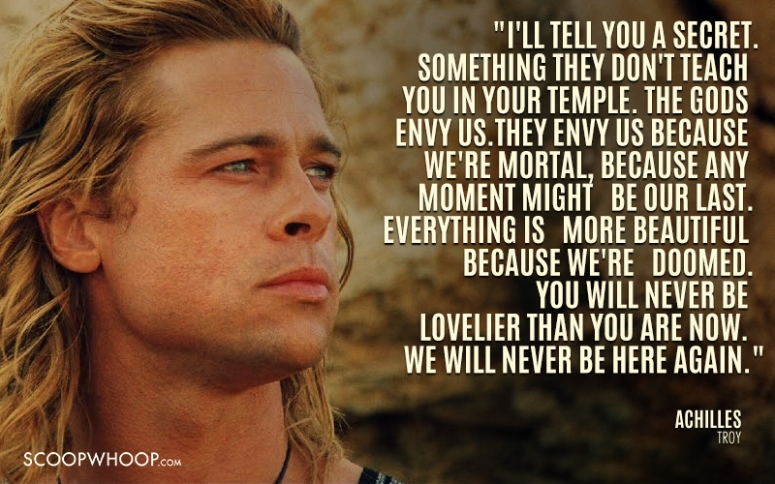 One thought on “I’ll Tell You A Secret. Something They Don’t Teach You On Your Internet…”