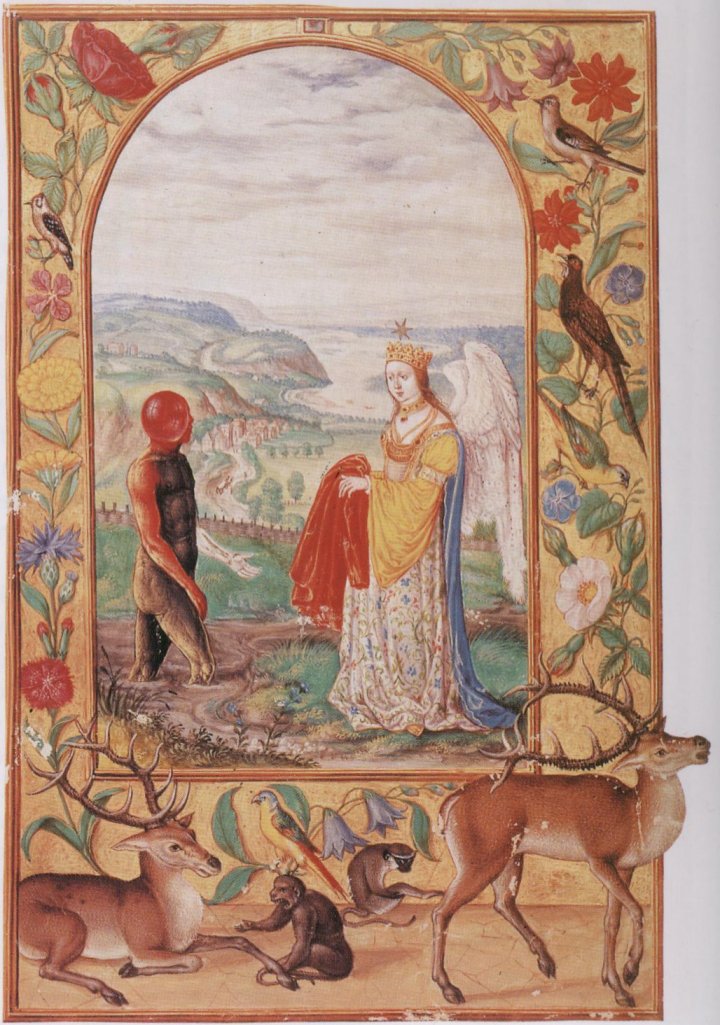 “She clothed the man with a purple robe, lifted him up to his brightest clearness, and took him with herself to Heaven.” -Trismosin

What could this image possibly mean? On the left, there is a strange being, mostly black, arising from the mud. His head and right arm are red; his left arm is white. It his white, or silver arm that reaches out, as if to accept the red robe that the other figure is offering him.

The alchemical texts at our disposal offer four distinct stages in the transformation of base metals into gold: nigredo. the black stage, albedo, the white stage, citrinas, the yellow stage, and finally, rubedo, the red stage.

Physical chemists took this literally; depth psychologists, following in the footsteps of Carl Jung, took this figuratively. From the standpoint of depth psychology, the black nigredo is the shadow, the things we hide from ourselves. The albedo, the white stage, is the hieros gamos, the sacred marriage of male/female, or anima and animus. The citrinas, the yellow phase, is the wise elder, the shaman.

And the red, or rubedo, which seems to be the point of this image, is what Jung called individuation; the point when the raw materia prima of our psyches turns into something whole.

So what is the figure on the right offering the initiate, rising out of the mud?

If we look to the text of the Splendor Solis, she is Sophia. Wisdom in a Biblical sense, and the descent of the soul in a Gnostic sense. But primarily wisdom: if you consider the word philosophy, it breaks down to philo: love, and sophia, wisdom.

The Gnostic aspects are also present in the monkeys (representing the body) and the stags (representing the soul, or consciousness) at the bottom of the plate. We saw monkeys in plate one, and deer in plate two. And now we find Sophia conferring a path through the Great Work to the aspirant.

On the bank of the river, holding out the red clock to the emerging man is Sophia. She has angel wings of white peacock feathers, and is dressed in a floral robe. Upon her head is a crown topped with a six-pointed star, a symbol used in many traditions to signify the union of male and female energies; hieros gamos again.

Last week we saw the drowning king, and learned from Aristotle that “The Destruction of one thing is the birth of another.” In today’s plate, we witness the other side of that phrase, the rebirth and transformation. Plate eight shows the acolyte emerging from the muddy waters, his body  black, his right arm and head  red, and his left arm silver. His head is covered by a blood red, semi-transparent cowl, reminiscent of a placental sac, and a symbol of the man’s rebirth.

From death comes life; or from the alchemist’s perspective, solve et coagula