SUN and Man create a Man, for the Sun’s force and spirit give life, and the process has to be gone through seven times, by means of the Sun’s heat.- Aristotle 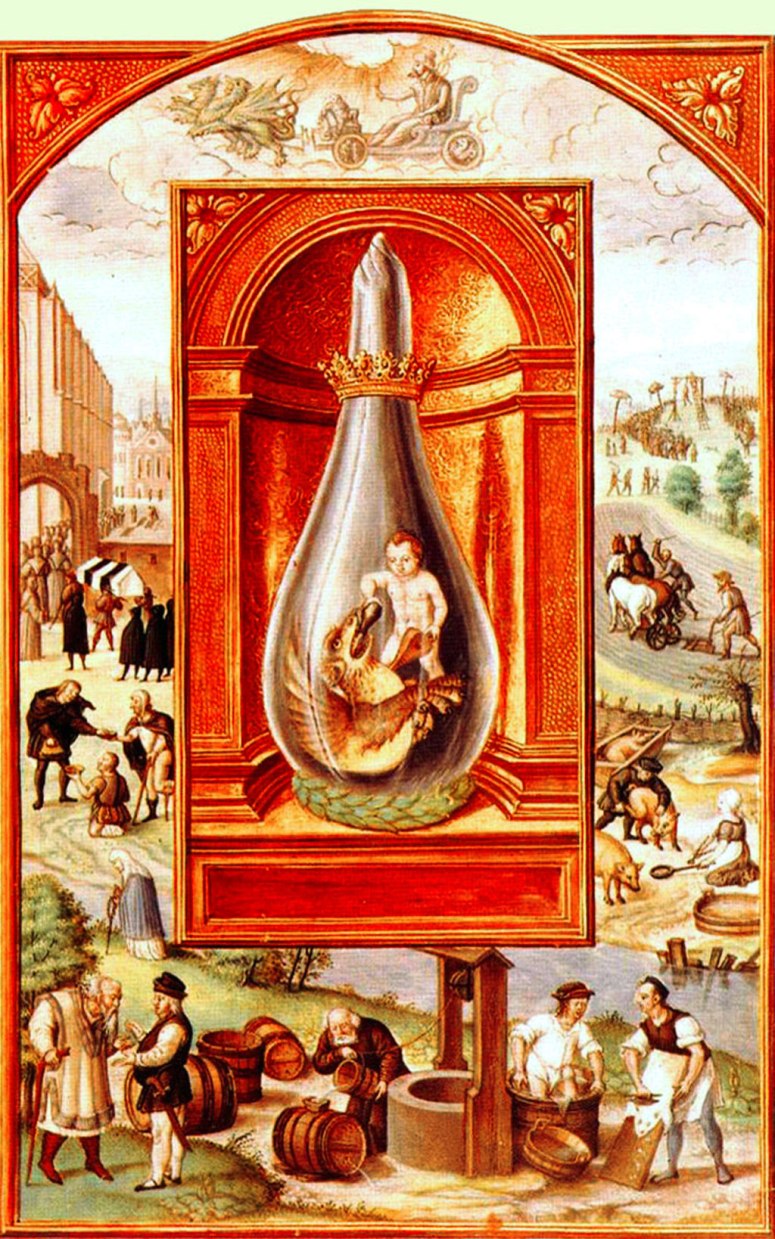 Last time we finished up the first of the two series of seven plates, the parables. Today we move onto the second series, a series which focuses on the physical operations of the alchemical transformation.

The 12th plate is the first of the second series, a series marked by the central, hermetically sealed cucurbit (the lower part of an alembic, or flask) that is the focus of each plate. In this plate the cucurbit contains a naked child who is wrestling with a golden dragon. In the child’s right hand is a black flask which he is forcing down the throat of the dragon, while in his left hand are a pair of bellows which he is holding against the dragon’s heart. This represents the process of calcination. The child is pouring the black Prima Materia into the dragon’s mouth, while he increase the heat of the flame with the bellows that are pressed against his heart. This will result in the decomposition of the Prima Materia into a substance that can be re-configured and rebuilt.

Above the vessel is an image of Mercury, identified by the caducean rod held in his left hand. He is in a chariot pulled by two golden dragons as they soar through the clouds.

The scene surrounding the cucurbit is one of a rural province, with many figures toiling away. Directly underneath the cucurbit is an old man drawing water from a well, pouring it into a barrel which he has failed to notice is leaking. On the opposite side of the well is a man in a barrel of animal hides. He tramples them as part of the tanning process, while a man beside him removes the hair from a skin. Above them is a pig farm; a woman feeds a pig in the foreground, while a man slaughters them behind her. Further above that we see a farmer plowing the fields. In the very distant background are a gathering of people,   surrounding a gallows where a man hangs. Moving over the left-hand side of the picture we see the gates of a town where a funeral procession is carrying in a coffin. Beside that we see a beggar on his knees begging for alms from a rich town folk.

This scene shows a number of scenes of death, and decay. The slaughtered pigs and the tanning of skins show the breaking down and transformation of one thing into another.

The fact that these scenes of physical break down are presided over Mercury is of serious import; Mercury is the Roman equivalent to Hermes, while Hermes is the Greek form of the Egyptian god Thoth. Consider that the supposed father of alchemy is Hermes Trismegistus, or Hermes the Trice-Great, and that Thoth is said to be the source of all alchemical wisdom, and the meaning(s) become stark: the price of the Great Work is death, be it physical, psychological, or metaphysical.

Or to quote the long dead poet Jim Morrison: “No one here gets out alive”.

Still, this image is no lament for the dead; it is instead a celebration of transformation. It promises life in exchange for sacrifice. To quote another poet, this time Neil Gaiman,

Death, the high cost of living.

Until next time, stay alive, but never forget the price of the Great Work, whatever your Magnum Opus may be.

One thought on “Splendor Solis: Plate 12”