Separate the gross from the Subtil, the earth from the fire – Hermes

The central cucurbit in plate fourteen now shows a white three-headed bird. Each head wears a golden crown, and the bird is standing, wings outstretched, in a posture similar to the phoenix rising from the flames. In plate thirteen this vessel contained three birds, the white and the red bird pecking at the black one in an attempt to dissolve it. The dissolution has finished, and we are left with a singular three headed bird from the contents. 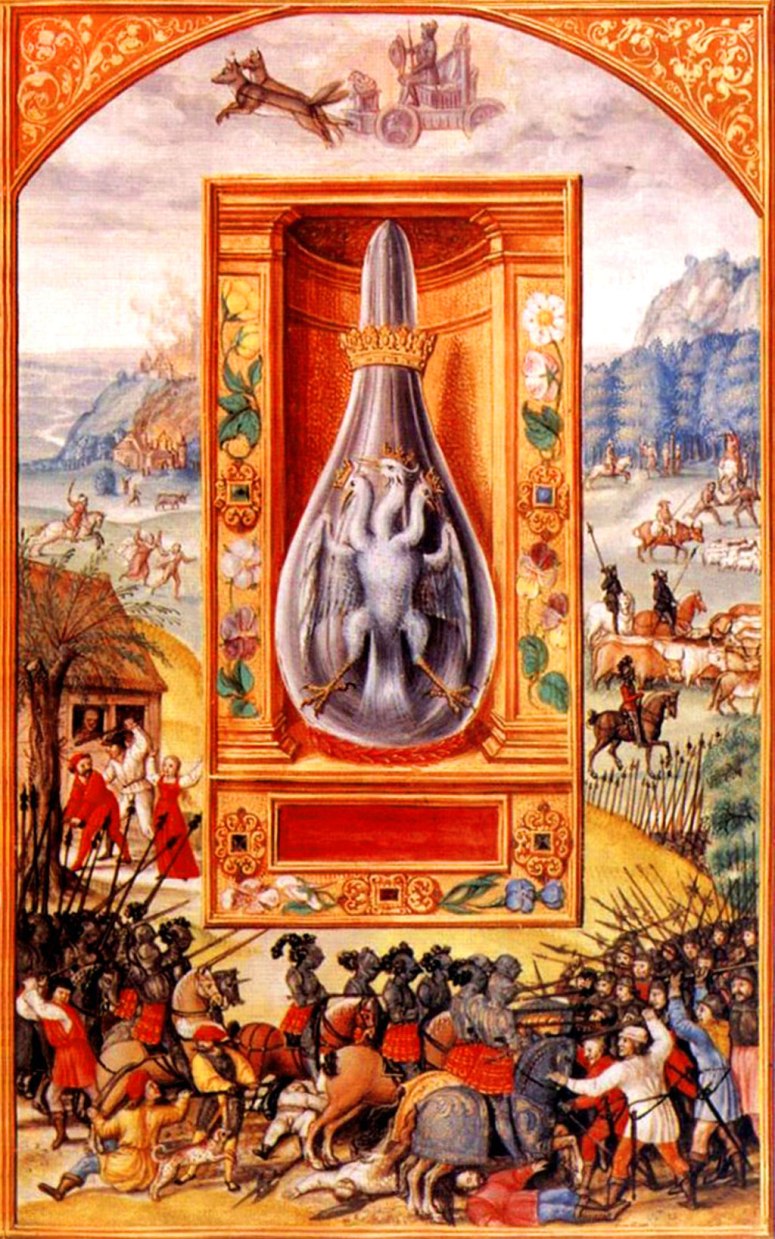 Above the cucurbit is the figure of Mars, his chariot pulled by wolves. The wolf was sacred to Mars as his twin sons Romulus and Remus (the founders of Rome) were suckled by a she-wolf. A snake sits coiled in the front of his chariot, and the wheels are decorated with the symbols for Aries and Scorpio. Mars is the god of war, and the scenes below him reflect this.

Below the cucurbit there is a confrontation between knights and peasants. The knights have horses and weaponry, and are crushing the peasants, many of whose dead bodies lay trampled beneath them. Yet the peasants still fight back, raising their pitchforks and tools in acts of defiance. Above them on the right there are scenes of men and women being chased from their homes and beaten, and above them, other homes on fire. The left-hand side shows the knights taking the spoils of war, driving off herds of cattle and sheep and cutting down trees, taking all that the peasants have worked so hard for.

This plate reflects the physical alchemical stage of separation, a process that needs to take place after the dissolution in the last stage. All the elements in this stage are mingled together in a singular solution, but they are at war with each other. The alchemist now needs to separate the pure substances out from the solution that contained the black prima materia. This separation is often done by distillation or sublimation, by heating the solution and collecting the vapors or smoke that rise off and condensing them, a process that can be likened to the rising of the bird. It is here that we move to the albedo stage, the white phase of alchemy. This phase was sometimes referred to as the bird of Hermes, a description used for the mercurial vapors as they rise:

Whiten the earth, and sublime it quickly with fire, untill the Spirit which thou shalt finde in it goe forth of it, and it is called Hermes Bird; for that which ascends higher is efficacious purity but that which fals to the bottome, is drosse and corruption – Aristotle

Psychologically, this is part of a process. A person doesn’t just dissolve their ego functions (and dysfunctions) and just move on; instead, there is a back and forth, a cycle and a recycle, all of which hopefully add up to growth. Some aspects rise, like mercurial vapors, some aspects fall, which are best left discarded. This marks another turning point in the alchemical journey depicted in the Splendor Solis; the collection of the pure evaporate, which brings us one step closer to completion of the Great Work, the transformation of the soul and the creation of the philosopher’s stone.

One thought on “Splendor Solis: Plate 14”