If you wander through the forests of Slavic speaking lands, you may come across a most curious hut. For one thing, outside the hut, you may find glowing skulls on staffs, along a fence made of human bones. The hut itself might be walking around on chicken legs. Should you peer inside the hut, you might be surprised to find that it’s bigger on the inside. And if you see the occupant of the hut? Run!

The female occupant is a cannibal witch with a voracious appetite for human flesh. Her nose is elongated, one of her legs is bony, and she smells out the “Russian scent” of those that stumble across her path, a path which is far reaching through the use of her flying mortar and her enchanted pestle. 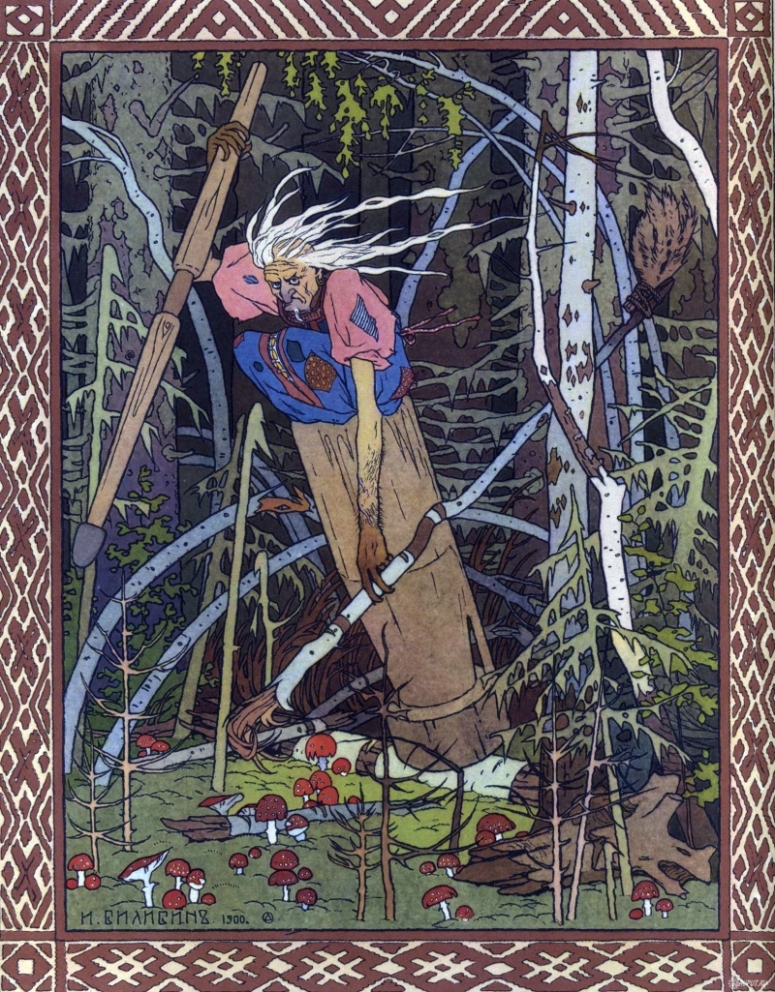 Her name is Baba Yaga, and despite all of her menacing attributes, her nature is ambiguous – she threatens destruction, but she often brings deliverance. This binary opposition is clear in the story of Vasilisa the Beautiful.

In this folktale, Vasilisa loses her mother when she is eight years old. On her death bed, the mother gives Vasilisa a small wooden doll, with instructions to give it a little food and a little drink; in return, the doll would always be there to help her.

In time, her father re-married, and the classic elements of the folktale start falling into place. The stepmother is evil; the stepsister are abusive. The doll is there as her magic helper, and her father disappears.

When the stepmother fears that Vasilisa’s beauty will land her a better suitor than her own daughters, she devises a plan. Putting out all of the flames in the house, she instructs Vasilisa to go into the forest, find Baba Yaga, and bring back one of her glowing skulls.

Following her doll’s advice to go on the quest, Vasilisa eventually ends up at Baba Yaga’s hut.

Baba Yaga gives her a set of both menial and impossible tasks. If she succeeds, she gets a glowing skull, but if she fails, she becomes Baba Yaga’s next meal. But Vasilisa still has her magical doll, and is able to accomplish all of the trials set before her.

Astonished, Baba Yaga demands an explanation. Vasilisa responds “by my mother’s blessing”, which sends Baba Yaga into a rage. Baba Yaga will have nothing to do with blessings, which may have to do with her presumed pre-Christian origins. Either way, she gives Vasilisa a glowing skull, and chases her away.

On returning home, she finds her step family starving and freezing. Ever since they put out the fires, no fires would light at all. They had been living hungry, in the cold, and actually respond with gratitude to Vasilisa’s return.

Unfortunately/fortunately, this part of the story is as ambiguous as Baba Yaga herself. When Vasilisa kindly presents the skull to her stepmother, the skull flares up, incinerating her entire step-family in one fell swoop.

There is a happy ending that sees Vasilisa becoming a master seamstress, being reunited with her father, and marrying the Tsar, but those are not the points I want to focus on. It’s the almost audacious way in which Baba Yaga defies attempts at classification.

Baba Yaga scholar Andreas Johns has this say about her: “[She is] a many-faceted figure, capable of inspiring researchers to see her as a Cloud, Moon, Death, Winter, Snake, Bird, Pelican, Mermaid or Earth Goddess, totemic matriarchal ancestress, female initiator, phallic mother, or archetypal image” (Baba Yaga: The Ambiguous Mother and Witch of the Russian Folktale, 9)

So maybe I exaggerated in the opening paragraph when I said if you stumble on her, you should run.

4 thoughts on “Baba Yaga and Vasilisa the Beautiful”