Coldbath Square Fields, London, early 19th century, a place known for its opulence and its proportionally severe prison system (the poets Coleridge and Southney expressed their dismay at the conditions in the jail by penning a poem entitled the Devil’s Walk, published in 1812):

“As he went through Coldbath Fields he saw
A solitary cell;
And the Devil was pleased, for it gave him a hint
For improving his prisons in hell.

But the year is now 1816, and in a palatial mansion, a woman is about to die. Her name is Jane Lewson, but her death is interesting for several reasons.

For starters, the reclusive widow was 116 years old.

Jane Lewson (née Vaughan) did a pretty good job of avoiding death. She lost her husband when she was only 26, but he left her enough money to live more than comfortably for the next ninety years. She never remarried, choosing to raise their young daughter by herself.

It was only after her daughter married and moved away, that her eccentricities started manifesting.

She stopped having visitors over, though she still had her servants change the sheets in the numerous guest bedrooms every morning.

Her trips outside of the mansion grew infrequent, but when she did go out, she drew attention for her fashion sensibilities, which dated back to the reign of George 1. He died in 1727.

In fact, she appeared so anachronistic that the locals took to calling her “Lady” Lewson, a moniker that stuck. 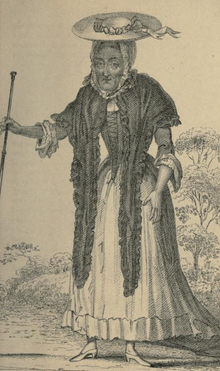 But things inside the mansion were stranger than her choice of apparel.

Lady Lewson was paranoid about germs. She only ever used one teacup, convinced that is was the only cup that could be hygienically trusted.

She refused to have her windows washed, afraid that they would break and she would catch a cold. By the time of her death, they were so filthy that light couldn’t penetrate them.

She did not bathe, as she believed her dirt helped keep diseases out of her body.

And the final secret to her success: she smeared herself on a daily basis with pig fat, another prophylactic method she was certain would keep her fit. After she had greased up her face, she would pancake on layers of makeup.

Her reputation certainly preceded her: some literary scholars have suggested that one of the central character in Charles Dickens’ novel, Great Expectations, is at least partially modeled on Lady Jane (the character in question is one Miss Havisham, a reclusive, rich and bitter woman who hates men).

Yes, these sound like the actions of a deranged mind. But for all her cray-cray, I think we should give her props on at least one count:

While Death may have had the last laugh, it still took Him 116 years to lay a bony fingers on the Lady smeared in lard.

Good on you, Lady Lewson.

Still, I for one would face the Reaper over not showering, living in darkness, covering myself in pig fat and using only one teacup.

On second thought, I might try the one teacup thing.