“May You Live in Interesting Times!” is not a Chinese blessing; it’s a coy curse. It’s like when your parents tell you to go on and stay out all night –  fine,  – “never mind how many hours we stayed up, worried and worrying, when you were just being born” – just, go on.

Thanks, mom and dad.

Regardless of our parents’ intentions, good or otherwise, we do find ourselves in…

But here’s where things get strange.

Yes! Yes!! and Triple Yes!!! And none of that has anything to do with this post.

I’m here to share the most sinister of all of his associations:

No ordinary Frog, I respond.

Kek is a primal member of the Ogdoad.

A.K.A. Pepe the Frog. This stuff is just starting to get swampy….

[Kek] is brandished as a kind of epithet, seemingly to ward off the effects of liberal arguments, and it often is conveyed in memes that use the image of the alt-right mascot, Pepe the Frog: “Kek!”

Kek, in the alt-right’s telling, is the “deity” of the semi-ironic “religion” the white nationalist movement has created for itself online – partly for amusement, as a way to troll liberals and self-righteous conservatives both, and to make a kind of political point. He is a god of chaos and darkness, with the head of a frog, the source of their memetic “magic,” to whom the alt-right and Donald Trump owe their success, according to their own explanations.

Kek even took over the Lord’s Prayer, once again reported by the Southern Poverty Law Center:

Our Kek who art in memetics
Hallowed by thy memes
Thy Trumpdom come
Thy will be done
In real life as it is on /pol/
Give us this day our daily dubs
And forgive us of our baiting
As we forgive those who bait against us
And lead us not into cuckoldry
But deliver us from shills
For thine is the memetic kingdom, and the shitposting, and the winning, for ever and ever.

So how did Kek get revived and misappropriated as a symbol of conservative Trumpism? It came about through a number of co-incidences, or, according to the Cult of Kek: “magical synchronicities”. Firstly, Pepe the frog was already the mascot of political threads on image boards such as 4chan, long before the election cycle. On a completely unrelated note, the laughter denotation LOL had become overused and too mainstream, and had been dumped by these communities. Instead they adopted Kek, a sound that imitates raspy, contained snickering, and had been mistranslated by WOW (World of Warcraft) to represent laughter for some factions.

As the 2016 election cycle began, and many members supported the rise of Trump, Pepe was given a make-over and inserted into M.A.G.A. merchandise. As Trump continued to discard convention, and disrupt the usual election cycles, many of the trolling communities laughed at and praised his behavior with the word “Kek” and the two things began to combine.

At a later point, this fragmented online community also discovered that one of the old Egyptian gods was named Kek. Kek was a member of the Ogdoad, who lived in the chaos before creation in the primordial waters. The male members of the Ogdoad also often happened to be depicted with frog heads on male bodies, and the connection between Pepe and Kek was reinforced. The Cult of Kek has since turned this association into a religious metaphor, which they have now also married with the Christian holy trinity, declaring Kek the father, Pepe the holy spirit, and Trump the son (Jesus), sent to Earth to fulfill his divine destiny.

Is it a metaphor? An allegory? A joke that grew into a global conspiracy meme?

Well, whatever it is it seems to hold some power, at least on 4chan boards and paranoid conspiracy boards as well. Kek has made appearances throughout the year since Trump’s bid for president, and given signs to supposed followers; the most telling of which involves recurring numbers, specifically the number 7. The number seven was the Egyptian symbol of such ideas as perfection, effectiveness, and completeness, and each half of Egypt was said to hold seven pieces of Osiris’s body. Kek also made one of his biggest appearances regarding the number 7 on 4chans /pol/, or politically incorrect board.

Now for those of you who have never used 4chan before, the numbers at the top of the post represent a unique/special ID, with a new one assigned to every post. A post simply saying “Trump will win” netted the special prize of getting all sevens seven times, in what is known on 4chan as ‘septs; it hit the magical jackpot.

This community has since tried to tie in other magical associations, claiming Trump’s win to be a result of synchronicity and chaos magic, but these often fall apart when scrutinized. One example is the association of Kek’s female partner Keket with Hillary Clinton. Yes, it makes for a great metaphor; the females were often depicted as serpent headed so it allows for  a plethora of jokes about snake-y female politicians, but it completely disregards the fact that they were partners to their amphibian counterparts, not enemies. Another “synchronicity” is the claim that a statue of Kek bears a hieroglyph of “Kek”, which looks like a person on a computer and is therefore the foretold destiny of keyboard warriors everywhere: 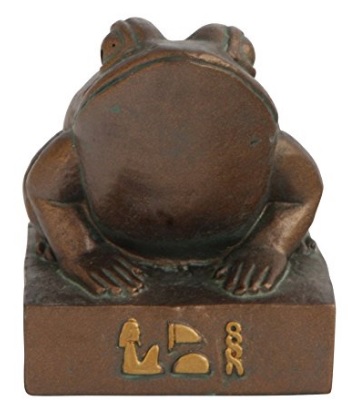 The problem is that the statue (and therefore hieroglyph) has been misidentified, and is actually Heket, the female goddess of fertility. Luckily for these communities the speed at which memes evolve and spread means that misinformation multiplies faster than truth, and no-one bothers to check sources.

Okay, Kek’s got a lot going for him. Now, just for the sake of fun, let’s take a look at the  other Reptilian conspiracies:

This list, as I understand, exists in the head-space of investigator David Icke:

And that’s literally just the tip of the Icke-berg.

Here’s what you need to know:

a) The End Is Near: Pack and Dress Accordingly

b) Don’t Trust The Frog.

c) And for Truth…

Ask the Frogs. They know as much as anyone… [P.S. For more on this, read Aristophanes’ The Frogs]…

And how to end this? Perhaps, Edward R. Murrow is the only one worth quoting: