Imagine this: you are a newlywed, living in Thailand, then known as Siam.

Your wife, Mae, is beautiful, and madly in love with you.

Life is good, living on the banks of the Phra Khanong canal. Fish are plentiful, and the days start to run into each other.

Soon, Mae is showing signs of being with child; you’re both overjoyed.

Just as the news settles in, you receive a notice:

You’ve been conscripted to go to war by King Rama IV.

You’re seriously injured in combat. You’re moved far from the battle front to be hospitalized.

It’s while recovering that you get the news….

Mae died from complications during childbirth.

The child, a boy, died as well.

As your purpose in life is stripped from you, so is your commission.

You are released from duty, and sent home.

There are whispers all around you as you wander back to your village.

But all that matters is that they are there, waiting for you; Mae, your beautiful wife, and a healthy baby boy, waiting in your home, very alive.

Your neighbors give you uneasy glances, but what do they know?

In poker, there’s talk of a tell; the nervous tick, the subconscious twitch that gives away a player’s motives.

Apparently, ghosts sometimes slip up too.

For even though the people of the town have been trying to tell you that your ‘Wife and Child are Dead’, you just can’t hear them…

Until your ghost-wife shows her hand…

One day, while making a curry paste, your wife drops a lime. Instead of bending over to pick it up, she stretches her arm over half her body length.

That night, you tell her you are going outside to use the toilet; you never come home.

The husband in this narrative, Mak, fled to the nearest Buddhist temple, at one point hiding behind a camphor plant (Blumea Blasamifera), which ghosts find unpleasant.  Temples, likewise, are ghost-free zones: angry spirits are not welcome on hallowed ground.

Blaming the residents of the village for her husband’s abandonment, she persecuted the population of Phra Khanong, haunting them ceaselessly, until the renowned Tantric Buddhist Master Somdet To trapped her in an amulet made from a part of her skull.

In a kinder variant, the venerable monk pleaded with her; upon assuring her that she would be reunited with Mak in her next lifetime, she abandoned the Shadow Spirit Realm and accepted rebirth.

Either way, the spirit of Mae Nak stopped haunting the poor souls of Phra Khanong.

Even beyond the grave 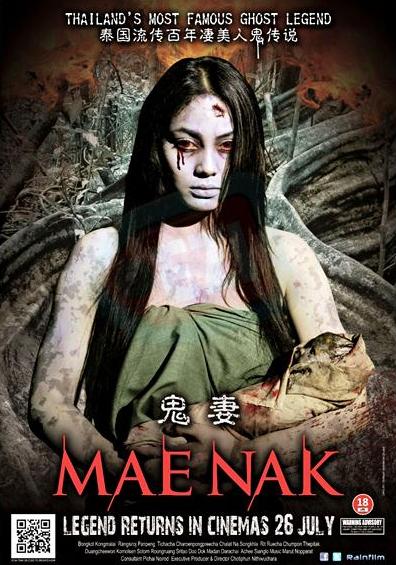