It was tricky putting together a narrative for Rama, the seventh Avatar of Vishnu. While there are definitely strains of Hinduism (mostly Shiva/Shakti lineages) that ignore the Rama narrative (the Ramayana), for many pious Hindus, Rama is a penultimate God Image.

Now, remember that penultimate means right before the ultimate…

For even more Hindus, the ultimate Avatar of Vishnu is represented in the form of Krishna.

Which means that any post on the Blue One must tread lightly on the beliefs of many people.

One of their children would rise up to kill the King, who happened to be Krishna’s uncle.

Hearing this information, the uncle locked up his sister and her husband.

He formulated a simple plan:

He would kill all of their children.

When Krishna was born, his father escaped with him from their jail, and crossed the nearest river to a village on the other side. There he swapped Krishna with the random child of a local milk herder; he smuggled the milk herder’s child back to the prison.

This child happened to be the Hindu Goddess Kali/Durga; when the King showed up to  personally kill the child, She manifested Herself, and told him his days were numbered, before vanishing.

She also saved his brother, Balarama, who we’ll examine in the next avatar post.

[for more on the Krishna/Kali connection, see David Kinsley’s The Sword and the Flute: Kālī and Kṛṣṇa, Dark Visions of the Terrible and the Sublime in Hindu Mythology]

Krishna grew up as a cow herder; in this role, his early childhood tales revolve around the village where he grew up.

He lifted a mountain to protect the village from the torrential rains; he subdued a Naga, a fierce water serpent, with his flute songs; he actively stole ghee (clarified butter) from the pots the village women hung, and then shared it with their daughters, the gopis, the milking girls.

What ever else he did he do with the gopis is left up to the imaginations of the various schools of  Krishna devotees; perhaps it was purely platonic, radiant love (or Bhakti in Hindu parlance).

Perhaps Radha, his favorite gopi, might take exception to that; that’s a more Tantric  view of the matter.

Either way, he was a blessed menace to the inhabitants of the village…

When he came of age, there was still an evil uncle to dispense with, across the river. This he did, and in the process came to princely status.

It is in this wake of this that he met his future best friend: prince Arjuna, a skilled archer.

When Arjuna’s brothers decide to go to war with their cousins over issues of kingdom, both sides come to Krishna to request his assistance.

He offered two options: one side could have his armies; the other side could retain him as an unarmed assistant.

Arjuna’s brother, Yudhistara, picked the right choice: he let his cousins have Krishna’s armies, and selected Krishna to be Arjuna’s charioteer.

This result of this choice: one of most celebrated works in Indic literature, the Bhagavad Gita.

[Note: the Bhagavad Gita is part of a much larger epic poem, the Mahabharata, which chronicles this war. Most scholars consider the Gita to be a later addition into the framework of the Mahabharata.]

On the field of battle, before the start of the war, Arjuna’s job as a general was to blow the war-conch, signalling the beginning of combat.

Arjuna, looking across the battlefield, seeing his cousins, teachers and friends, decided not to initiate the war. He laid down the conch. 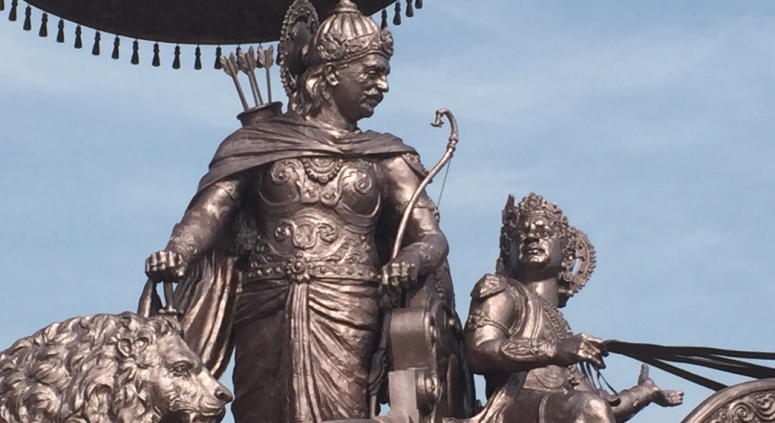 Since there is no way to meaningfully condense the entirety of the Bhagavad Gita (literally the Song Divine), I’ll just skip to my favorite track on Krishna’s album:

It’s the last song, where Krishna takes on his form as Cosmic Destroyer, and essentially points out to Arjuna that no matter what he does, everyone on the battlefield is finite, and will die.

So saddle up, and let’s get started.

I do little justice to Krishna’s actual words, though Robert J. Oppenheimer quoted them after the nuclear bombings of Hiroshima and Nagasaki.

“Now, I am become death, the destroyer of worlds”

Krishna is a trickster, a lover, a mystic and a destroyer. He places cosmic gambles, and his bets usually win…

When the mother of Arjuna’s cousins realized that all of her children had been massacred, and Krishna, an Avatar of Vishnu, had done nothing to stop it, but actually encouraged it, she cursed him.

And all of his clan.

In the aftermath of the war, which left all blood-lines nearly extinct, Krishna went to the forest, and laid down.

For the last time…

A hunter mistook his heel for a deer; a poison dart went straight into his foot.

The hunter tried to save Krishna’s life, but it was too late.

Krishna, for his part, was serene.

Forgiving the hunter, he let his soul ascend skywards, going on a trail that neither Brahma the Creator nor Indra, God of the Heavens, could follow.

And so ended the tale of Krishna…

So what ever became of his brother, Balarama?

Next: the Ninth Avatar of Vishnu, B…

4 thoughts on “Krishna, the Eight Avatar of Vishnu”