In Japanese mythology lives a giant catfish, Namazu. For thousands of years he swum around in the underground rivers and lakes that ran beneath the earth, but the problem was that as he wriggled his giant fat body through the muddy waters the earth trembled and shook and everything would come tumbling down. The thunder god (and sometimes sumo wrestler) Kashima-no-kami put a stop to Namazu’s havoc wreaking behavior. He drove Namazu’s head into the ground using a giant keystone and pinned him there underneath its weight. Legend says that on days when Kashima-no-kami forgets to pay attention and hold down the stone Namazu will start to creep out his feelers and wriggle them around causing the earth to shake once more. 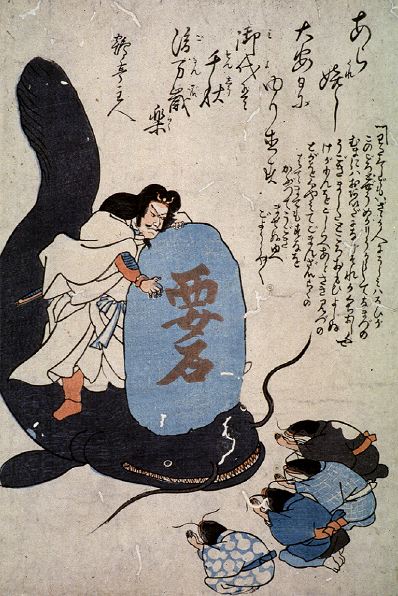 The top of this legendary keystone can be found at the Kashima shrine, peeking above the ground. It is said that one of the feudal lords, Tokugawa Mitsukuni , attempted to dig up the stone in the 1600’s to see what was underneath. He dug for seven days and gave up – still nowhere near reaching the bottom. Many other shrines in Japan also installed a keystone as back-up to help recapture Namazu if he ever escapes his current location. Folklore and mythology in the region also suggests that you can predict an earthquake by watching the catfish in the rivers.

So is there a connection between catfish and earthquakes? Some Japanese researchers thought strongly enough that they managed to convince the Japanese government to fund a 16 year study in which seven catfish were monitored daily to see if they showed any signs of predictive behavior before an earthquake event. The project which cost around $60,000 USD annually was eventually disbanded in 1992 due to inconclusive evidence, but one of the lead researchers remained convinced. In an interview with the LA times Yasuo Baba of the Tokyo Metropolitan Marine Experiment Station claimed

Consistently, all seven of the usually sluggish fish greatly increased their activity several days before about 31% of earthquakes that registered “quite strong” or higher on the Japanese earthquake scale

That’s better than a random association, we believe the research was successful, but our sponsors in the Tokyo government didn’t think it was going anywhere. They want to discover ways to predict a major earthquake, but the fish are sensitive to even shallow ones.

Perhaps there is some wisdom in these old tales after all…