You are a shepherd’s daughter; from the time you were a child, you’ve worked the loom.

This is no longer work; it is pure art. It comes as naturally as breathing; it isn’t something you do.

It’s who your are. Your craft describes and defines you.

Some people can present their gifts with grace.

Others, not so much.

Your name is Arachne, and you are about to weave your own fate.

One of my favorite authors, the late great Robert Anton Wilson, once made a proclamation:

“Don’t eff with the ineffable.”

Likewise, don’t gloat over a Goddess.

Athena was the Goddess of War.

But she was also the Goddess of Arts and Crafts.

It was said that she sprang fully grown and armored from Zeus’ forehead.

Other tales recount that Zeus had swallowed Metis, Titaness of Wisdom.

After they had made love.

(it should be noted that Greek deities frequently ate their own, including Zeus’ father Kronos (Roman: Saturn), who devoured all of Zeus’ siblings).

Either way, she was a powerful force; part of the Fall of Troy can be attributed to her being slighted by Paris.

In other words, she wasn’t a Goddess you wanted to upset…

She told her friends that was a greater weaver than Athena.

What’s worse, she refused to give any credit for her skills to the Goddess.

One day she was approached by an old woman, who challenged her to a weaving contest, but started with a warning:

“You can never compare to any of the Gods. Plead for forgiveness and Athena might spare your soul” crowed the crone.

Arachne laughed at her.

“I only speak the truth. If Athena thinks otherwise she can come down and challenge me herself”

Of course, we all know where this is going.

The old woman shed her skin, revealing Athena in her full, radiant splendor.

Once again, there are many versions of this tale.

I’m going with Ovid’s Metamorphosis for this retelling.

In his version, the Gods are called in to judge the two finished pieces.

This is what they saw:

In the center were the Olympian Gods, sitting with gravitas, presiding over the Heavens and the Earth.

What could Arachne counter that?

She could have given up…

Or she could go Pure Punk Fury.

Arachne’s painting demonstrated all the ways that the Gods had abused their powers.

Zeus was especially targeted for his many sexual exploitations/rapes: Leda, caressing the swan (Zeus in disguise, from here on just Z.i.d.), Danae being raped by a golden shower (don’t snicker, still Z.i.d.), Europa being carried away by a bull (yes, Z.i.d. again).

The rest of her woven tapestry was equally impious.

By all accounts, Arachne won.

And while her point of might hit home with the other Gods, Athena was…

And struck her head three times, using her powers to fill Arachne with guilt.

It was too effective.

Even for Athena, who was capable of feeling guilt and shame herself.

And as Athena watched her rival’s dead body slowly swinging, she decided to do something.

Whether it was a gift or a curse, a redemption or a further condemnation, is entirely up to your point of view.

Guilty as you are

And so you never forget,

You and your children,

and your children’s children,

until the end of time,

And with that she sprinkled her with the juice of Hecate’s herb, aconite (a deadly plant that grew from Cerberus, the three headed hound of hell, was dragged into the daylight by Heracles).

Seeing as Ovid wrote a book called Metamorphosis, we shouldn’t be surprised that he liked describing – well – metamorphosis.

Her fingers turned into legs.

And then her head shrank, as did the rest of her body.

the Mother of All Spiders was spinning.

What’s the take away?

Know when to back down?

Or is it at all costs?

Was Athena being merciful, or was it the ultimate degradation?

Either way, spiders abound, and I sometimes like to think that they’re spinning graffiti,

Telling the Gods what they really think. 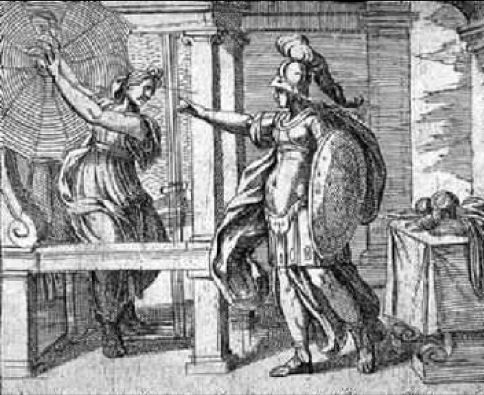