El Caganer (which roughly translates to “The Shitter”) is one of the top billed customs on those “Craziest Christmas Traditions Around the World” lists that circulate through social media each year. Made up of a figurine that is crouched down, pants around its ankles and visibly defecating, it is a unique addition to the Nativity scene in Catalonia, and perfect fodder for a viral list engineered to make us laugh at the “crazy” customs of others, or to gasp at the blasphemy of it all. Clearly the Catalonians did not invent this long held tradition to either entertain or offend the masses…so where did it come from, and what is it’s significance?

First, it must be understood that El Caganer is not the only addition to the Catalonian nativity scene. Many assume that the El Caganer is just placed into a standard issue Mary, Joseph and baby Jesus nativity that at most contains an angel, 3 wise men and possibly a donkey and/or a sheep, which would make the addition of a defecating figurine appear bizarre and blasphemous. This is why it is important to realize that nativities in Catalonia tend to be much more complex, and may include the entire town of Bethlehem with all sorts of additional scenes beyond the central manger. El Caganer is generally discretely tucked away within one of the external added scenes, quietly going about his business.

While El Caganers come in a variety of modern styles, including the English Queen, American presidents and various celebrities, traditionally El Caganer was modeled on a Catalonian peasant dressed in his customary garb of a white shirt, black pants and red cap. His addition to the Nativity scene is intended to bring the owner both luck and good fortune; historically this has always been tied back to agriculture and the tending of the land to provide good harvests. By pooping on the land El Caganer is ensuring its fertility for the coming year, a meaning that can be lost in a post-agricultural world. The Catalonians also have a traditional “pooping log” that defecates candy and presents to all the good children, so the act is one of bountiful giving rather than shameful waste production.

In 2005 El Caganer was omitted from the official Barcelonian city council Nativity scene as defecating in public went against public ordinance rules. There was a massive outcry against his removal as it would bring bad luck for the coming year. Concessions were suggested such as adding a policeman next to El Caganer writing him a ticket, to both respect the old traditions and the new rules, but instead the city council just added El Caganer back in, continuing the long held and cherished tradition.

While we don’t advocate public defecation, especially on your local nativity scene, rest assured that right now, in Catalonia, El Caganer is leaving a little extra Christmas cheer for all good boys and girls. 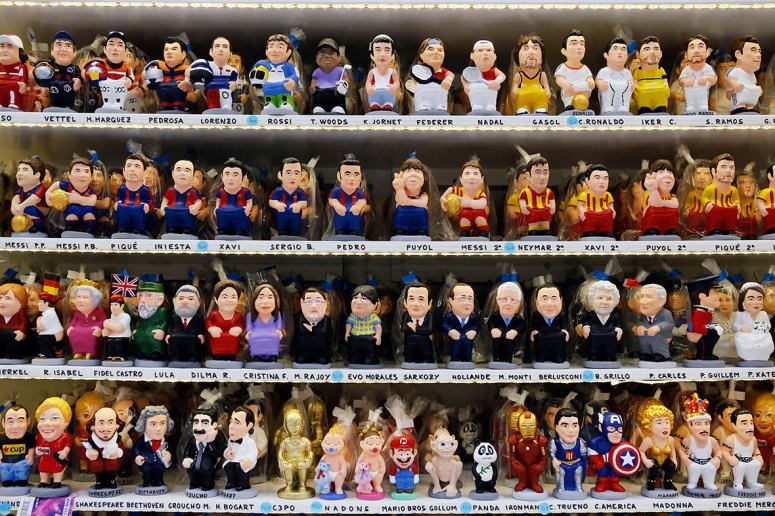 3 thoughts on “El Caganer: Gifts That Keep On Giving.”