If you find yourself driving through the central Queensland outback of Australia, you might come across this sign, erected by the Boulia Shire Council: 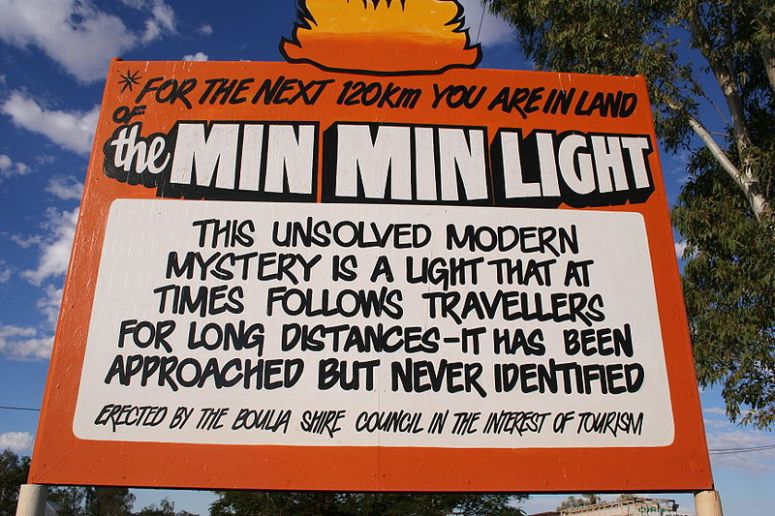 The Min Min lights are one of the strangest outback phenomena, large floating orbs of light that dance among the trees, and are often reported to chase and follow people travelling through the area. They were known locally as ghost lights, thought to be the spirits of the dead that haunted the site of the Old Min Min Inn, a notorious watering hole. The hotel was situated along the old coach road, and mainly serviced shearers from the surrounding stations. The hotel had a rough reputation, from doctoring the alcoholic drinks to readily available drugs, and it was the site of many a bar brawl and murder. The fact that the Hotel had a cemetery attached is completely indicative of its infamy.

The hotel itself burnt down sometime in the early 1890’s, and it was shortly after the fire that a stockman turned up panicked at the local police station, and made the first recorded sighting of the lights in the area:

“You won’t believe me, but it’s true— I swear it’s the gospel truth! About 10 o’clock this evening I was riding not far from the Min Min graveyard when all of a sudden I saw a strange glow appear right in the middle of the cemetery. I looked at it amazed. The glow got bigger, till it was about the size of a watermelon. I couldn’t believe my eyes as I saw it hovering over the ground. And then I broke into a cold sweat, for it started to come towards me. It was too much for my nerves. I was terror-stricken. I dug the spurs into the horse and headed towards Boulia as fast as I could. But every time I looked back over my shoulder I could see the light following me! It only disappeared when I got to the outskirts of the town”.

While the account was not taken seriously at first, reports continued to pour in, and there have been thousands upon thousands of sightings to date including reports from numerous scientists that have gone out to study the effect. The lights are not restricted to the Boulia area, they have been witnessed all over Australia, but the Boulia area has the most frequent sightings. Europeans first documented the lights as early as 1838, but the accounts existed much earlier in the oral traditions of the aboriginal Australians.

The current theoretical explanation, held by Professor Pettigrew from the University of Queensland, is that it is an optical illusion caused by refracted light which creates an inverted mirage. This phenomena is known as a Fata Morgana, named after the Arthurian sorceress Morgan Le Fay and her ability to conjure up illusions. Whatever the cause is, I can only imagine how terrifying it is to be chased by a floating orb through the desolate remoteness of the Australian outback.

Bill Beatty, ‘The Mystery of the Min Min Lights’ in The Sydney Morning Herald 25 Jan 1947.