Skip to content
Therefore the Earth flowers and bears manifold coloured blooms and fruits, and in her interior has grown a large Tree with a silver stem, stretching itself out to the earth’s surface – Solomon Trismosin 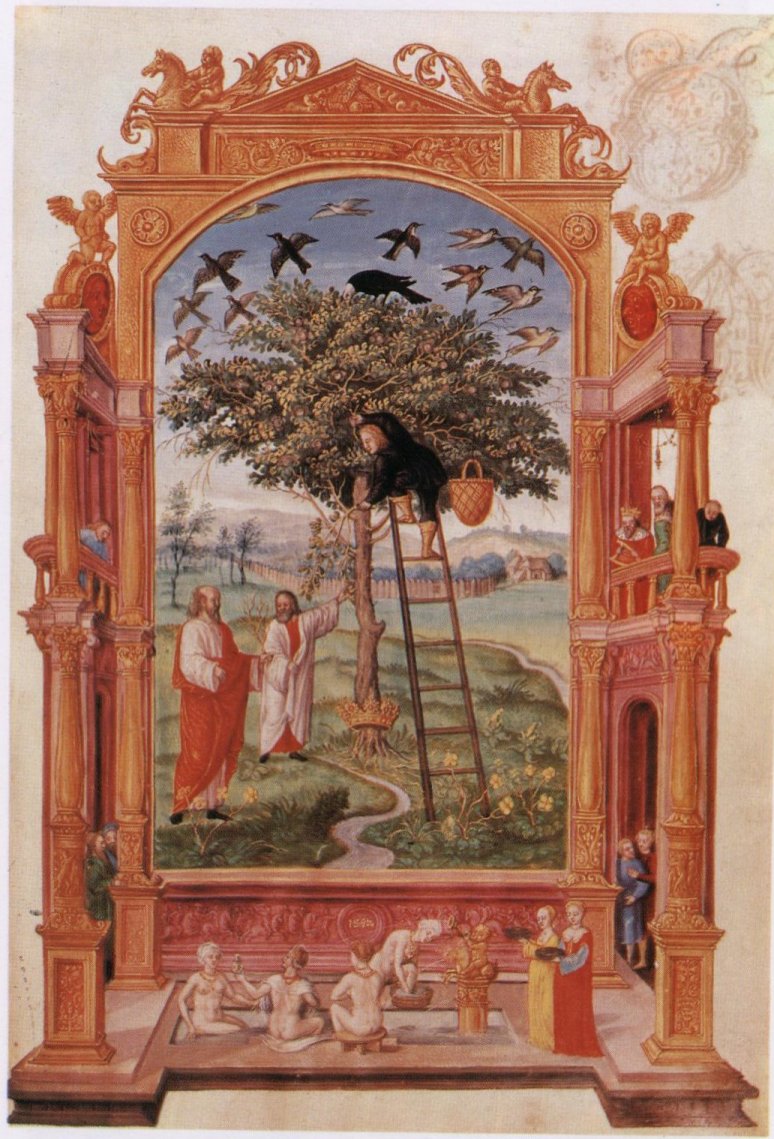 Plate six shows a central panel containing a tree laden with golden fruit. There are two philosophers conversing under the tree, while a youth has climbed a ladder and is handing down a golden bough to them. The accompanying text reveals to us the primary mythological parable of this plate, a scene from the Aeneid: “Of this tree speaks VIRGILIUS, in the sixth book of the AENEIDE, when he relates a Fable, how AENEAS and SILVIUS went to a tree, which had golden branches, and as often as one broke a branche off, another one grew in its place” (Trismosin 29). Aeneas is determined to visit the underworld to find his father, so he goes to the temple of Apollo to speak with the Priestess Sybil. She tells him that by the entrance of the underworld grows a sacred tree upon which is a golden bough. The bough allows one return passage from the underworld, and if the Fates allow, one can break off the branch, if not the branch will be impossible to remove. The re-iterates the fact that nature is still in control, if the tree refuses to yield its branch, then the journey cannot be completed.

(side note: this tale from Virgil’s Aeneid was the inspiration for the classic text on comparative religion, James George Frazer’s The Golden Bough).

The youth climbing the tree has one foot on the sixth rung, and the other on the seventh, suggesting that he is nearing the end of his initiation. We can see this play against the color stages of alchemical process as well, the initiate is all in black, the color of the prima materia, the nigredo stage. His boots are gold though, the color of his quest, and one foot has already obtained the top. The motion of his climb has set 13 of the birds that were on the tree into flight. The birds circle the tree, colored black and white, with the occasional streak of green that represents the changing of the nigredo to the albedo, and the green flash of the peacock’s tail that signifies the transformation. The one bird remaining on the tree has a black body, with a white head. The white head picks away at the yellow flowers of the next stage.

The golden bough the youth is plucking representing the citrinitas stage, the yellow crystal flowers, that appear just before the final rubedo stage. The philosophers below wear robes that reflect this changing state. The philosopher reaching out for the branch wears a robe that is white on the outside and red inside, while the philosopher who has already received his branch wears it’s opposite (red outside, white inside). These robes show how the yellow flowers are the catalyst that moves the white albedo stage to the red rubedo stage.

The tree itself wears a crown around the base of its trunk, and we can see the start of its root system as it penetrates the ground. The crown is placed there to remind is that the tree is not just what we see above the ground. The roots create their own complex structure below the earth which is equally important. The tree creates an axis mundi which connects the heavens with the underworld. It replicates itself underground: “As above, so below”.

The frame around the central panel creates a balcony structure, where multiple men, including the king, have positioned themselves and are looking down upon a scene of women bathing. Last week’s pedestal parable, that of Queen Ester, had a biblical theme, as did both the story of David and Bathsheba, and well as the tale of Susannah. Both these stories include a thematic thread of men peering at a woman innocently bathing, and then causing her strife because of their uncontrollable desires. This scene is unlike either of those stories though as the scene appears to be one of peace as the women bathe together. The men watch openly, and the women are untroubled by their presence, both male and female in perfect harmony.

This is an illustration the alchemical conjunctio, the sacred marriage of opposites, which runs in tandem with the tantric idea of Lila, sacred love play, as well as the Taoist concept of Yin and Yang, not to mention C.G. Jung’s notion of anima/animus.

Until next time, stay alchemical.