Imagine this: you’re working as a prop hand for a very successful T.V. show in 1976, a production called the 6 Million Dollar Man. An upcoming episode is slated to be filmed in Long Beach, California, in a an amusement park called the Pike.

The episode is called The Carnival of Spies, and the Pike contains oddities galore; one of them is a wax mannequin hanging from a gallows set. The mannequin in question has to be moved out of frame, out of camera shot. So, you’ve got to move it.

As you do, the arm breaks off – revealing bone and muscle.

This was no wax mannequin; this was a petrified human, mummified over the course of many long years.

So who was this person, and how did he end up on a T.V. set?

The answer is Elmer McCurdy, a.k.a. the Bandit Who Wouldn’t Give Up.

Born in 1880, Elmer started off his life in a rough way. His mother was only 17 years old; his father was unknown, but might have been his mother’s cousin. Raised by an uncle and aunt who adopted him, life took a downward turn in Bangor, Maine (yes, that Bangor, Stephen King fans) after his uncle died.

His teenage years were turbulent; he grew resentful of his biological mother and his aunt, who had pretended to be his real mother. He started to drink heavily, a practice that he would carry over for the remainder of his life.

As a young man, he worked as a plumber until the economy crashed; this would be in 1898. Following the death of his mother and grandfather, he moved Westward; in time he found his way to Kansas.

At 27, he joined the United States Army, and was stationed at Fort Leavenworth, Kansas, where he learned a dangerous trade: how to blow things up with nitroglycerin, Ti-Nitro-Toluene, or TNT for short

After being honorably discharged at the age of 30, Elmer had nowhere to go, but he did have some skills: he knew how to blow things up.

What followed were a succession of botched robberies, in which Elmer ended up destroying more precious cargo than he attempted to steal. If this story wasn’t so macabre, it would read like a comedy; unfortunately for Elmer, it didn’t end on a funny note.

After an ill-conceived train heist, he fled to a friend’s property in Oklahoma, where he attempted another robbery.

A newspaper account of the robbery later called it “one of the smallest in the history of train robbery.”

While he failed to get any big money, he did acquire two very large jugs of whiskey.

He went back to his friend’s place, and got silly drunk, unaware that there was a bounty on his head.

One would think that his story would have ended there…

But no one came to claim the body.

The Undertaker was not amused; he had done his job, which included  mummification with arsenic, plus shaving and dressing the deceased. Time equals money, and the Undertaker wanted his due wage.

And that’s how Elmer corpse ended up outside the Undertaker’s shop, propped with a rifle in his hands. Elmer’s remains had been reduced to corporate marketing, with a Charon like twist: visitors were invited to put coins in his mouth, for good luck.

A few years later, a man showed up claiming to be Elmer’s brother. With another “brother”, they paid the Undertaker off; Elmer was now officially a side show attraction.

He got top billing: he was the “Embalmed Bandit”, “The Outlaw Who Would Never Be Captured Alive”, “The Bandit Who Wouldn’t Give Up”.  His body promoted a drugs-ploitation movie (Narcotic!) and wound up in the movie She Freak. He was displayed besides a wax effigy of the famous outlaw Jessie James, and despite his increasingly gruesome deterioration, nobody cared or remembered he was a real person, not a wax prop.

In time, he wound up at the Pike, in Long Beach, California. His remains, which were still deteriorating, were re-varnished in glow-in-the-dark paint, and he was was hung from a scaffold, a fate he had escaped in real life.

So, imagine this: you’re working as a prop hand for a very successful T.V. show in 1976, a production called the 6 Million Dollar Man. An upcoming episode is slated to be filmed in Long Beach, California, in a an amusement park called the Pike.

You go to move a prop, a wax mannequin, off the shoot. When you do…

An arm breaks off, and you find the remains of a real person. Bones and Muscle.

If there are angry ghosts, I hope that Elmer McCurdy’s spirit is at peace.

Because at least, after over half a century, he was finally given a proper burial.

And when we visited his grave, in Guthrie Oklahoma, this past (2017) Memorial Day… 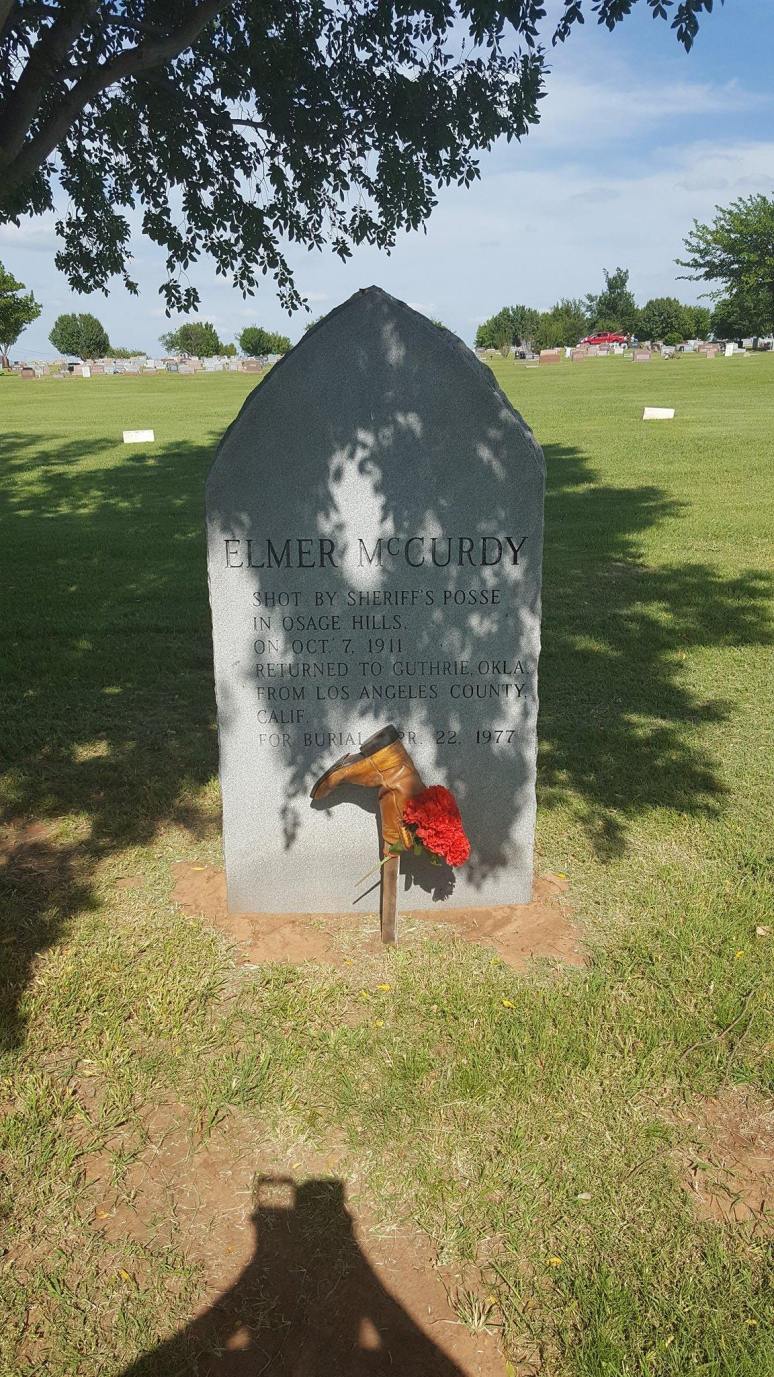 One thought on “The Curious Case Of Elmer McCurdy, The Bandit Who Wouldn’t Give Up”